The massive winter storm battering the US with plunging temperatures coast-to-coast has left thousands without power and prompted more than a dozen governors to create emergency response plans ahead of Christmas weekend.

The storm – well on its way to becoming even stronger Friday – has delivered heavy snow and ice, making for grim road conditions with poor visibility, leaving some drivers stranded in unbearably frigid temperatures.

Travel is also being snarled, with hundreds of miles of road closures and flight cancellations growing rapidly.

Ahead of the holiday weekend, more than 200 million people in the US are under wind chill alerts from the Canadian border to the Mexican border and from Washington state to Florida, with below-zero wind chills expected in the Southeast by Friday. Other winter weather alerts are in effect for blizzard conditions, ice, snow as well as flooding.

“The National Weather Service’s Watch Warning graphic depicts one of the greatest extents of winter weather warnings and advisories ever,” the agency said Thursday.

Notably, parts of Montana, South Dakota and Wyoming have already seen wind chills below minus 50 degrees Fahrenheit in the past two days.

“The ongoing major winter storm will continue to produce areas of heavy snow, strong winds, and life-threatening wind chills through Saturday. If traveling for the holiday, please use extreme caution and pay attention to the latest forecasts and updates,” the National Weather Service said Thursday.

On Friday, the storm is expected to unleash more heavy snow and blizzard conditions, particularly in the Midwest.

As it treks east across the country, the storm is expected to become a bomb cyclone, a rapidly strengthening storm which drops 24 millibars of pressure within 24 hours. The storm’s pressure is forecast to match that of a Category 2 hurricane as it moves into the Great Lakes Friday.

The storm is also lashing places in the South unaccustomed to such extreme winter conditions. Thousands of homes and businesses were in the dark early Friday across Texas, Louisiana, Tennessee, Mississippi as well as Missouri, according to Poweroutage.us.

Governors in at least 13 states, including in the South such as Georgia and North Carolina, have implemented emergency measures to respond to the storm. Declarations of a state of emergency in several states have included the activation of National Guard units.

Plus, more than 2,600 flights have already been canceled Friday due to the storm. 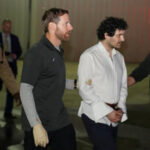 FTX founder appears in court on fraud charges
Next Article 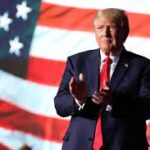