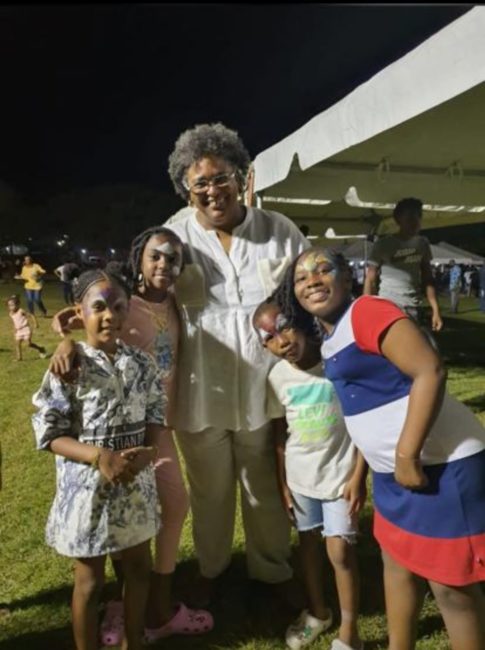 Jubilant screams of delight echoed through the picturesque grounds of the National Botanical Gardens on Saturday evening. Prime Minister Mia Mottley, parliamentary representative for St Michael North East and MP Arthur Holder, parliamentary representative for St Michael Central hosted a joint children’s party. The party, which catered to members of their constituencies, attracted a large crowd who moved comfortably around the spacious venue.

There were numerous activities for the children to participate in. The jumping tents were a hit, with a steady procession throughout the evening. A team of face painters worked in tandem to make light work of the eager patrons who gathered at their stations.

Some of the other attractions, which captured the exuberant attendees’ attention, were horseback riding and the characters crafting balloon animals. For those with a sweet tooth, the Frostees truck located on site and the cotton candy station were a must.

Deejay music heightened the festive atmosphere. Both MPs used this opportunity to mingle with their constituents and did not hesitate to accept the numerous photograph requests.

When questioned by Barbados TODAY as to any specific wishes for his constituents, Holder noted that he wished them nothing but true happiness. The MP hopes that there would be good fellowship among the members of his constituency and there would be no violence in the area. He expressed, “I hope that prosperity reigns on the constituents of St Michael Central in 2023, and any wishes and any hopes that they have that these dreams are realised, that is my hope for them.”  He promised, “I will fight to the end to ensure things get better for them in 2023.”

Holder provided some insight into his plans in the coming year. One of the initiatives that he has in the works is a breakfast programme, which will be commencing shortly. He underscored the need for the venture stating, “I appreciate and understand the level of poverty and the level of unemployment and the hardship  that pervades society and St Michael Central is no exception.” The base for the project will be the Andrew Alleyne Community Centre, however there will be satellite locations to adequately service his constituency.

The representative is also seeking to redress the lost time that school children have suffered as a result of COVID.  He noted, “We have gathered together a team of volunteers and we are doing an evening lessons programme for persons who are getting ready to sit the 11 plus. I have already contacted teachers from various schools who have volunteered to do it and assist with me. It will be done out of the constituency office in King Mary Road.”

In addressing the ongoing situation with the residents of Bellevue, Waterford St Michael, he has assured that steps are being made to remedy this. He indicated that the residents have been interviewed and town halls will be utilised, with one slated to be as soon as February. Holder acknowledged that the Barbados Water Authority had gone through the area, and they had spoken to the residents who would be entitled to having remedial work done, with regard to septic tanks. He highlighted all the basic utilities that a human being should have will be coming to the people of Bellevue very shortly. Holder added, “All of the preliminary work has been completed, the most important thing was to identify the residents who are entitled to such, and we have done that.”

47 mins ago
@DamienSwaby Thank you for the information. I was able to confirm a colleague has responded. I will now be closing… https://t.co/S0ftgj0tfj