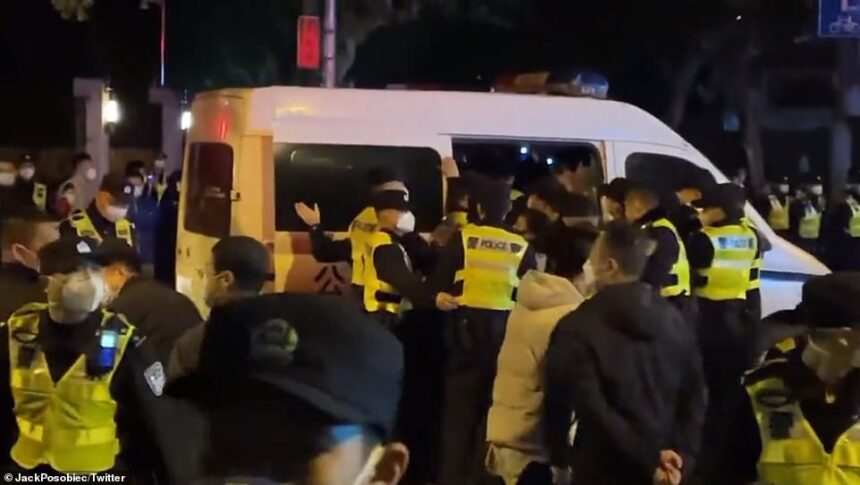 Hundreds of students have filled the streets at Tsinghua university in Beijing in yet another protest against the ruthless zero-Covid policies of President Xi Jinping’s Chinese Communist Party (CCP).
The crowds carried a series of placards touting anti-regime slogans and erupted into a series of chants, calling for ‘democracy’ and ‘freedom of expression’.
The university in the Chinese capital is the latest public location to be rocked by unprecedent civil unrest and demonstrations on a scale unseen since the infamous Tiananmen Square protests of 1989 which ended in hundreds of deaths when the army was deployed to quell the uprising.
‘At 11:30 am students started holding up signs at the entrance of the canteen, then more and more people joined. Now there are 200 to 300 people,’ one witness told an AFP journalist.
Participants sang the national anthem and ‘the Internationale’ – a standard of the international communist movement – and chanted ‘freedom will prevail’ and ‘no to lockdowns, we want freedom’, they said.
The witness also described students holding up blank pieces of paper, a symbolic protest against censorship.
Demonstrations have erupted in at least seven cities – including Shanghai, Nanjing and Guangzhou – with violence breaking out between local cops and furious protesters.
Footage circulated on social media showed crowds tearing down metal fences and barricades as they grappled with security officers who deployed their batons and tear gas in attempt to control the swell of humanity.
The largest demonstration appeared in Shanghai – home to 26million residents – with many boldly demanding Jinping resign.
Officers used pepper spray against about 300 protesters, according to a witness, but western journalists reported the numbers to be in the thousands.
Meanwhile last night hundreds gathered to mourn the deaths of at least 10 people in an apartment fire last week in Urumqi in the Xinjiang region, where residents were sealed in their buildings to try to stop the spread of Covid.
It comes amid China launching another mass crackdown on the virus with crippling lockdowns put in place across the country, nearly three years after the pandemic started there.
The nation reported another 39,791 new cases spread across the country – the biggest one-day increase on record – including a record 4,307 in Beijing alone.
But it appears ill-equipped for the latest battle with Covid, with it using its own vaccines, rather than approved foreign ones, which do not have the same effectiveness at beating back the virus. 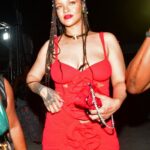 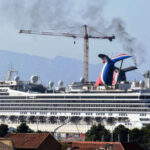 55 mins ago
@DamienSwaby Thank you for the information. I was able to confirm a colleague has responded. I will now be closing… https://t.co/S0ftgj0tfj