The father of a schoolgirl who was beaten by two female students in a classroom at the San Fernando West Secondary School wants justice.

The incident, which occurred on Monday, was recorded by other students and two videos have since gone viral.

They show Anell Jordon’s 16-year-old daughter and two girls fighting in the classroom. His daughter was cuffed and kicked while other students looked on.

Jordon explained that his daughter, a Form Four student, had only returned to school that day after serving a suspension for a week and two days.

He explained that his daughter was recently accused by some students of making a fake social media profile of a female student. However, he said his daughter did not own a cellphone. He said his daughter told him a group of students had planned to beat her that day (October 26) but a dean “put her out” of the school due to the allegation.

Jordon was upset that the school took this type of action without notifying either him or her mother. He said later that day, he met his daughter and her mother in San Fernando and she told him a group of students who were standing a short distance from them wanted to beat her.

“I simply say anybody hit my child I going to take a different level,” he told Guardian Media.

However, he claimed the students reported to the police and school officials that he threatened to kidnap them.

He went to the Community Police last Monday for advice, since his daughter was not given a suspension letter and the officers called the school. He said the police told him the school was wrong to send her home without a suspension letter. However, he said on Monday she was allowed to return to school.

“They start to jump-kick my child and beat up my child, the two girls, because is the fella who instigating it.”

Jordon said he was in San Fernando waiting to pick up his daughter when a student’s father called him about the incident.

The father said his daughter is now afraid to return to school.

“I want to know what the ministry doing about this, I want them to intervene.”

The father said no one from the school has since reached out to him.

“Right now, she is saying she don’t want to go back to school. She feeling threatened, she feel it wouldn’t stop. I will seek a transfer and I will seek justice. Why allyuh beat my child?”

He intends to go to the Ministry of Education in San Fernando today to make an official report.

This incident comes on the heels of an incident at the Tranquillity Government Secondary School where the principal Ann-Margaret Robinson was thrown to the ground when she attempted to intervene in a fight. Some of the students involved in that incident have since been suspended. 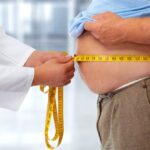 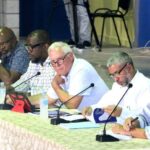