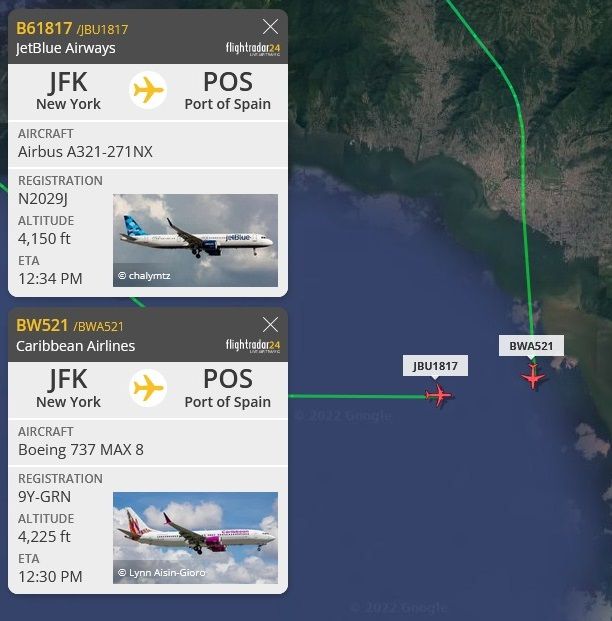 The pilot of a JetBlue Airways aircraft approaching the Piarco International Airport around 12.30 pm Monday, was forced to take evasive action to avoid close contact with a Caribbean Airlines aircraft which was on a trajectory to cross JetBlue’s path at nearly the same altitude.

The pilot took the decision independent of air traffic controllers, as he spotted the danger and alerted the Piarco Tower to it.

JetBlue 1817 was flying at 4,150 feet in an easterly direction over the Gulf of Paria on its final approach to Piarco at 12.34 pm when it contacted the Piarco Tower and was told by an air traffic controller to continue its approach.

After confirming the instructions, the pilot then told the tower that he was seeing “traffic at 11 o’clock, same altitude”.

The air traffic controller then asked, “JetBlue 1817 confirm you are descending to the field?”

The pilot then replied, “Negative, JetBlue 1817 climbing to avoid traffic conflict with Caribbean Airways crossing final two miles ahead of us right now.”

The air traffic controller then told the pilot to contact the Piarco Approach controllers, which the pilot confirmed.

Both planes were arriving from JFK, New York.

The JetBlue flight was allowed to continue its approach after and landed ahead of the Caribbean Airlines plane.