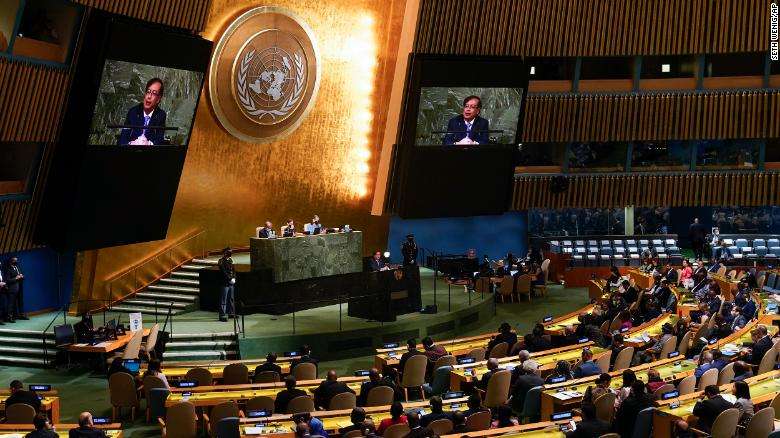 United Nations Headquarters (CNN) In his first address to the United Nations General Assembly on Tuesday, recently elected Colombian president Gustavo Petro delivered a fiery speech that recalled some of his campaign themes, slamming the war on drugs as a failure and accusing the global north of turning a blind eye to the destruction of the Amazon.

Abandoning the careful wording that characterizes so much diplomacy at the UN, Petro contrasted the dangers of drug addiction to what he described as humanity’s even more damaging “addiction to irrational power, profit and money.”

“What is more poisonous for humanity, cocaine, coal or oil?” he asked.

“The opinion of power has ordered that cocaine is poison and must be persecuted, while it only causes minimal deaths from overdoses … but instead, coal and oil must be protected, even when it can extinguish all humanity,” he said.

Following UN Secretary General Antonio Guterres’s warning that “our planet burns,” Petro also called the global discourse around saving the environment “hypocritical,” saying recommendations and warnings from scientists about the destruction of the Amazon rainforest have long been ignored.

Ending the war on drugs

Colombia is the world’s biggest producer of cocaine, and over the past 50 years public authorities have pushed a prohibitionist agenda, banning the trade and consumption of drugs in order to hit the criminals that profit from drug trafficking in their pockets. So far however, the stream of illicit substances has not ceased.

In his speech, Petro, who was inaugurated last month, called on all of Latin America to stop the war on drugs.

“Reducing drug use does not require wars,” he said. “It needs all of us to build a better society.”

This country calls time on the ‘war on drugs’

Petro has said in the past that he wants Colombia to export foods rather than cocaine and incentivize other kinds of production through agricultural subsidies instead of weapons. His administration also recently presented a bill to legalize recreational marijuana in the country, with Colombian Sen. Gustavo Bolivar — a close ally to Petro — telling CNN in August that he believed regulation could one day extend to cocaine too.

His appeals on Tuesday for a regional approach to to drugs did not fall on deaf ears. During a press briefing after the day’s speeches, Bolivian President Luis Arce said on Tuesday that his administration had been in discussion with Petro around the themes of the speech.

“He shared the ideas with us that he spoke about today. We would like to hear a very specific proposal about this,” Arce said.

Though noting that Bolivia and Colombia face very different situations in terms of drug trafficking, Arce added that he did think Colombia, Peru and Bolivia — the three largest producers of cocaine in the world — should align their “criteria” in combating the issue.

Since Petro took office, the three countries are all run by left-leaning leaders.

Bolivia already has a thriving legal market of coca byproducts, mostly dry leaves that are chewed by the indigenous population and the governments of Bolivia and Colombia have previously pushed for a regional re-thinking of drug policies in multilateral meetings.

From CNN’s Caitlin Hu in New York and Hira Humayan in Atlanta. Previous reporting by CNN’s Stefano Pozzebon in Bogota. 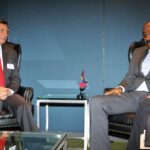 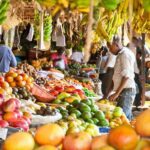