The Ministry of Education is moving to transform and modernise the school system and curriculum, the Education Minister says.

During her remarks at the Barbados Community College (BCC) graduation ceremony held at the Gymnasium, Wildey, St Michael on Saturday, Kay McConney said the school system has to respond to the needs of national development and aligned with local, regional and international best practices and standards.

“Part of the effort is creating and implementing meaningful, rigorous and relevant curriculum … and in preparing for our collective future as a country, your Ministry of Education, Technological and Vocational Training, we have been working with renewed vigour to transform the education system in Barbados and as such we are being guided in out efforts by a new strategic plan that outlines the way forward for the next five years,” she said.

“This plan lays out the path to achieving the ministry’s mission to create a modernised, high-quality and relevant education system that fulfills the diverse needs and interests of all learners and educators of industrial partners of societal stakeholders and that aligns with our national development goals.”

She said there are 22 action points of the plan but did not give details on them.

Praising the work of the board ofmanagement at the campus, McConney said the envisioned school system would embody much of what was done at BCC to enhance the type of education young people in today’s era received.

“Within the last few years I am proud to say that BCC expanded its curriculum. It has launched a number of new courses designed to help equip participants with the tools to enter and thrive in any one of the many multi-billion dollar industries that are currently driving the world economy. Recognising that the robotics industry is projecting to grow significantly in the coming years, the Barbados Community College launched the course called Introduction to Coding and Robotics in September of this year and according to Fortune Business Insights, the global industrial market for robotics is projected to grow from US$16.78 billion in 2022 to US$35.68 billion by 2029.”

The minister also lauded the college for introducing other courses such as Digital Storytelling and Digital Marketing, adding that the school is also exploring the possibility of designating sign language interpreters on campus to assist hearing impaired students.

During her address, principal Annette Alleyne announced that after several years, she was pleased to announce that 64 workers were appointed during the academic year.

She also spoke about the upgrades to the school’s facilities and some of the work teacher’s recently published.

She said that US$127 880 was donated to the nursing programme.

This was the first in-person graduation ceremony held since 2019 and 819 people graduated. 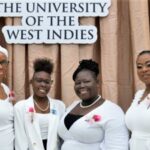 Nurses create history at The UWI, Cave Hill
Next Article 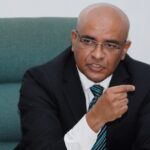 No intention for Guyana to be refinery capital of Region; govt will only sell 30,000 bpd to 1 refinery for national security
Leave a comment Leave a comment